Golang Database Library Orm Example - Many to Many

In this post, we will look at listing users with all their addresses. users and addresses table are joined with a pivot table, user_addresses, which holds the foreign key of each of users and address table primary key. 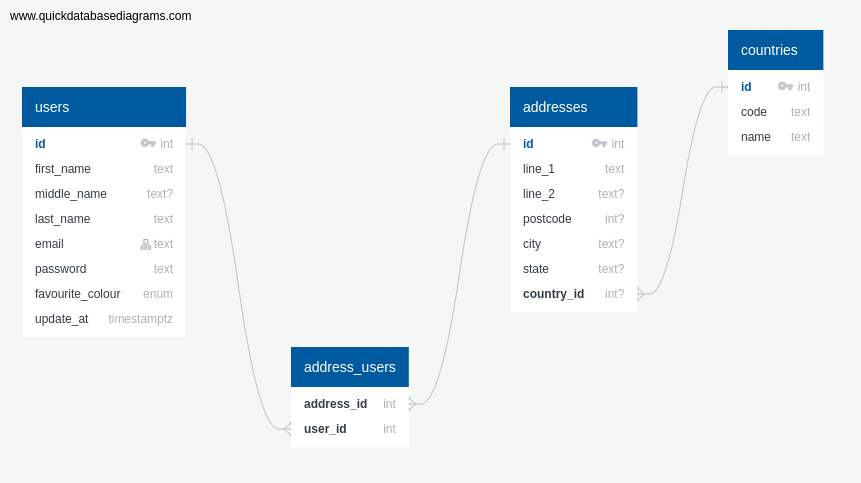 As the erd suggests, a user can have many addresses, and an address can belong to many users.

This is part of a series of blog posts including:

The runnable code is available in the repository https://github.com/gmhafiz/golang-database-library-orm-example

There are many ways to do this. The most straight away method (what most ORM does) is to perform a query on each of the related tables.

ORMs often does this automatically for you. Writing sql manually means you have to do all the steps above.

The other way is to perform left joins on the tables, starting from users, and ends with addresses. Left join is important because if we perform an inner or right join instead, if a user do not have an address, that user record will not be returned. While doing left joins, alias, especially on IDs must be set to prevent name conflict. In my opinion, this method is a poor fit when doing a many-to-many operation, the following method is better.

Finally, it is possible to use array_agg (for postgres) function or group_concat for mysql/mariadb. You write the least amount of Go code but requires you to have a sufficient amount of SQL knowledge to craft the correct queries.

We will take a look at two methods, method 1 which by which is by doing a query on each table, and the third method, which is relying on a single query. I will omit the second method because it is much more complicated than method 1.

If you look at the full source code, it is 2 pages long. So, I will only include relevant snippets here.

Starting with sql queries, we try to limit number of users to 30.

To find out the address of each user, we get that relationship from the pivot table. For an array of user IDs, we can always do a SELECT DISTINCT u.id FROM users u LIMIT 30;. But this is an additional query while we can extract the IDs from query #1.

We then get all address IDs, and we execute this query.

Notice that the two last queries uses ? instead of $1. It relates to sqlx’s ability (or inability) to properly turn array values for IN operator.

Once we perform the first sql query, we can the result into a custom struct ([]*UserResponseWithAddressesSqlx), one with address field.

We retrieve all user IDs and get its associated addresses with the second sql query. We need to scan and hold the data with another struct so that wen use it to find the associations later.

Then get all address IDs and execute the third sql query. Scan the results into a new address struct - it needs the db struct tag.

Note that if a user record do not have any address, the value for address key will be null, instead of an empty array.

In my opinion, this is too much code for just a simple two tables plus a pivot table to deal with. Imagine having to eager-load 7 tables deep. That is a nightmare.

So let us take a look at using the third method, which is using array_agg and row_to_json and see if it is anything simpler. If you take a look at the SQL query below, it looks similar to the query we have done for 1-many, but we are now joining three tables:

The relevant bits are that the join starts from the ‘lower’ aggregated records (addresses table) and we work our way up to the users table.

With array_to_json(array_agg(row_to_json(a.*))), we turn each row in addresses as a json array. After performing the left joins, we select user columns we want and finally group them by user ids. The result is we only get users that have at least one address.

Notice that this SQL query omits users that do not have any addresses. To include them, simply change the JOIN above to RIGHT JOIN.

One caveat, just like we showed n one-to-many example is that we need to parse the json array from DB back to a Go struct if we want to play around with it. If you don’t we can simply scan into json.RawMessage.

Doing M2M query is similar to sqlx but with less boilerplate. No need to manually scan database results to a struct because they are all generated for you, but you still need to extract IDS from each. For method 1, it only takes a page long to perform many-to-many compared to almost 2 pages long for sqlx.

You still need to manually attach address to a user like sqlx. Also, you need to remember to initialize addresses for a user like above instead of leaving it empty.

It is even simpler with method 3. Sqlc generates a method that you can simply use:

However, since it outputs a struct consisting of sql.Nullstring for middle_name and an enum for favourite_colour, we want to convert them into another struct

Performing many to many is very similar to doing a one-to-many. We supply a slice to User pointers and gorm will use reflection to infer what we want.

Unlike sqlx and sqlc, a user without address will be marshalled with an empty array

The amount of code needed to be written is also greatly reduced compared to both sqlx and sqlc. The key is to use Preload() method. What is not obvious is what magic string you need to supply to it. The answer is the name of the field itself - it has to match. For example, User struct has Addresses in its field, so we supply the string Addresses inside Preload().

We also need to tell Gorm the pivot table that is used to link between users and addresses table. It is done by using a struct tag gorm:"many2many:user_addresses;".

Gorm has no code generation like sqlboiler and ent. Instead, it relies on structs (and struct tags) as its point of reference.

Unfortunately I cannot find an easy way to eager load many-to-many relationships with sqlboiler. Current recommendation is to fall back to raw sql queries.

We use the same pattern as what we did with one-to-many - {{ With{{Model}} }} pattern. If a user has no address, the edges key will only contain an empty object.

Ent makes 3 separate sql queries, just like what we have done for sqlx, and sqlc.

In my opinion, the API is very straightforward and there isn’t a way to get it wrong. Everything is statically typed with no interface{} anywhere which makes it predictable. Only downside I can think of is you need to define the relationship in the model schema correctly.

In conclusion, using raw sql is too much work when it comes to loading many-to-many relationships. Imagine if we want to load 7 tables deep, it’d be a nightmare. While using sqlc improves upon sqlx by reducing a good deal of boilerplate, it still pales in comparison to using an ORM. You need to be careful with struct tag with Gorm, and it was not obvious that you had to use a field name for Preload(). Ent does not have Gorm’s issues as everything is typed. You will need to learn to using With... pattern though which isn’t a big deal.